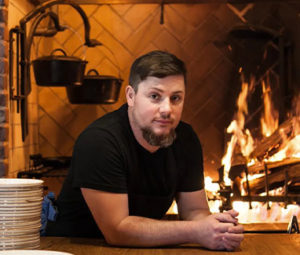 Executive Chef Raymond England leads the kitchen at Husk with local purveyors and ingredients at the forefront, truly embracing the spirit of HuskĂ˘â‚¬â„˘s identity in highlighting Southern cuisine. With humble beginnings on his familyĂ˘â‚¬â„˘s cattle farm in rural Idaho, England knows the value of every ingredient that comes through the door. He joined the Husk team in 2022 after years in award-winning kitchens across the country, including time spent working under Top ChefĂ˘â‚¬â„˘s Tom Colicchio and Chef Matt Accarrino at Craft in Los Angeles, CA.

England got his start in the restaurant industry as a dishwasher at age 15, a Ă˘â‚¬Ĺ“real jobĂ˘â‚¬Âť after years of work on the farm and the familyĂ˘â‚¬â„˘s construction business already under his belt. Working his way up the hospitality ladder and loving every minute of it, England set his sights on attending Le Cordon Bleu College of Culinary Arts in Portland, OR, where he graduated with an associate degree in Occupational Studies in 2004. Following various Sous Chef positions in Oregon and Colorado, England went on to serve as Chef de Cuisine at Craft LA under Chef Colicchio and Michelin-starred Chef Accarrino. While cooking under these mentors, England not only grew as a chef, but also honed his leadership skills, building confidence both in the kitchen and interacting with guests in the dining room. Throughout his nearly eight years at Craft, England worked with over 70 different local farmers and purveyors daily, finding his stride in cooking with the seasons. He also prioritized the community through local events, such as a charity pig roast aimed to raise money for the farmers, as well as donated his time and talent for various causes.

Craving a change in culinary perspective, England moved to Charleston in 2015 to open Scarecrow and Co. with Craft Culinary Director Damon Wise, where he served as Executive Chef and developed a vegetable forward menu along with dry-aged steak and bread programs. Most recently, England served as the Executive Chef at Tavern & Table, where he overhauled the restaurantĂ˘â‚¬â„˘s menu, bringing his hyper-local and seasonal approach to the cuisine.

In March of 2022, England joined the Husk Charleston team as Executive Chef, where he will work closely to maintain HuskĂ˘â‚¬â„˘s ethos of sourcing Southern ingredients and working with local farmers, growers, and fishermen, as well as HuskĂ˘â‚¬â„˘s resident gardener to grow new ingredients and put Ă˘â‚¬Ĺ“feeling and meaning into every dish.Ă˘â‚¬Âť HeĂ˘â‚¬â„˘s also excited to enhance the wood-fired elements on the menu, revitalizing classic Southern preparations and introducing new dishes along the way.

England is constantly looking for ways to support the community in his free timeĂ˘â‚¬â€śone of his favorites being eating out at local restaurants. He also enjoys spending time with his wife and getting outdoors, whether thatĂ˘â‚¬â„˘s golfing or tending his home garden.